Astronomy:  The Orionid meteor shower reaches its peak tonight after midnight through tomorrow's pre-dawn hours and the same for after midnight tomorrow, with about 15 shooting stars per hour.  This year, the waning crescent moon might hinder optimum viewing.  Still, you might be able to see something.  EarthSky says that viewing is best in the wee (and very chilly) hours before dawn.  Look south/southeast; the meteors will appear to be coming from Orion's right arm (on your left as you look at the constellation). 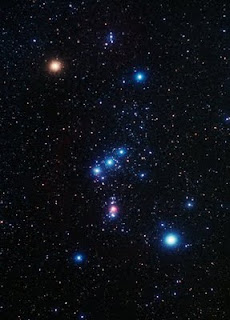 You should know what Orion looks like (after the Big Dipper, it has to be one of the easiest constellations to recognize), but if not, here is one of the clearest images I could find.  The 'belt', the three stars at an angle, is very recognizable.  The reddish-yellow star marking his right shoulder (on your left as you look at it) is Betelgeuse, and the meteors seem to come from just above that. 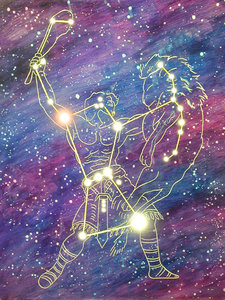 Orion, in Greek mythology, was a mighty hunter - a real Nimrod - and so in his honor, and that of Canis, his faithful companion, let us have a HUNTER'S STEW:

Start with 2 pounds of moose, elk, caribou, venison, or (if you are not a hunter; or you are, but your shot accounted for one of the local farmer's best milk cows, and you have paid a really whopping fine and now own a carcass) beef pot roast.

[ahem!  And even if he flushed a pheasant and startled you so that your shot went wild, dropping poor Elsie in her tracks, please do not substitute faithful Canis for the above. Thank you.]

Cut up the meat into manageable chunks and brown in 2 tablespoons of hot bacon fat in a large saucepan or kettle.  Just cover browned meat with water and simmer, covered, for about an hour.

[From the Experience Files: check on the level of water throughout the hour.  You'd be surprised how fast it can evaporate, even at a slow simmer.  Add a little hot water if needed.]

[And for faithful Canis?  Probably his usual kibble.  Something like this recipe might operate so powerfully on his digestion as to make moving the doghouse to the very end of the back-forty feasible.  Of course, cabbage may have the same effect on the Mighty Nimrods of the house, in which case they too should be sent out to the back-forty.]
Posted by Mrs. Rudd at 12:01 AM

An article of dress worn in token of grief; a mourning garment or badge; especially in the plural, mourning garb, as of a female; as a widow's weeds.

(Unofficial) The name I have given my house, as I yearly lose ground in the fight against the encroaching wilderness.

"Don't publish your acts of charity -
The Lord will keep the account straight."

The Widow is reading...

Not much other than the Bible and the Catechism (and whatever blogs are on my feed). I'm studying for my Catechist Certificate.